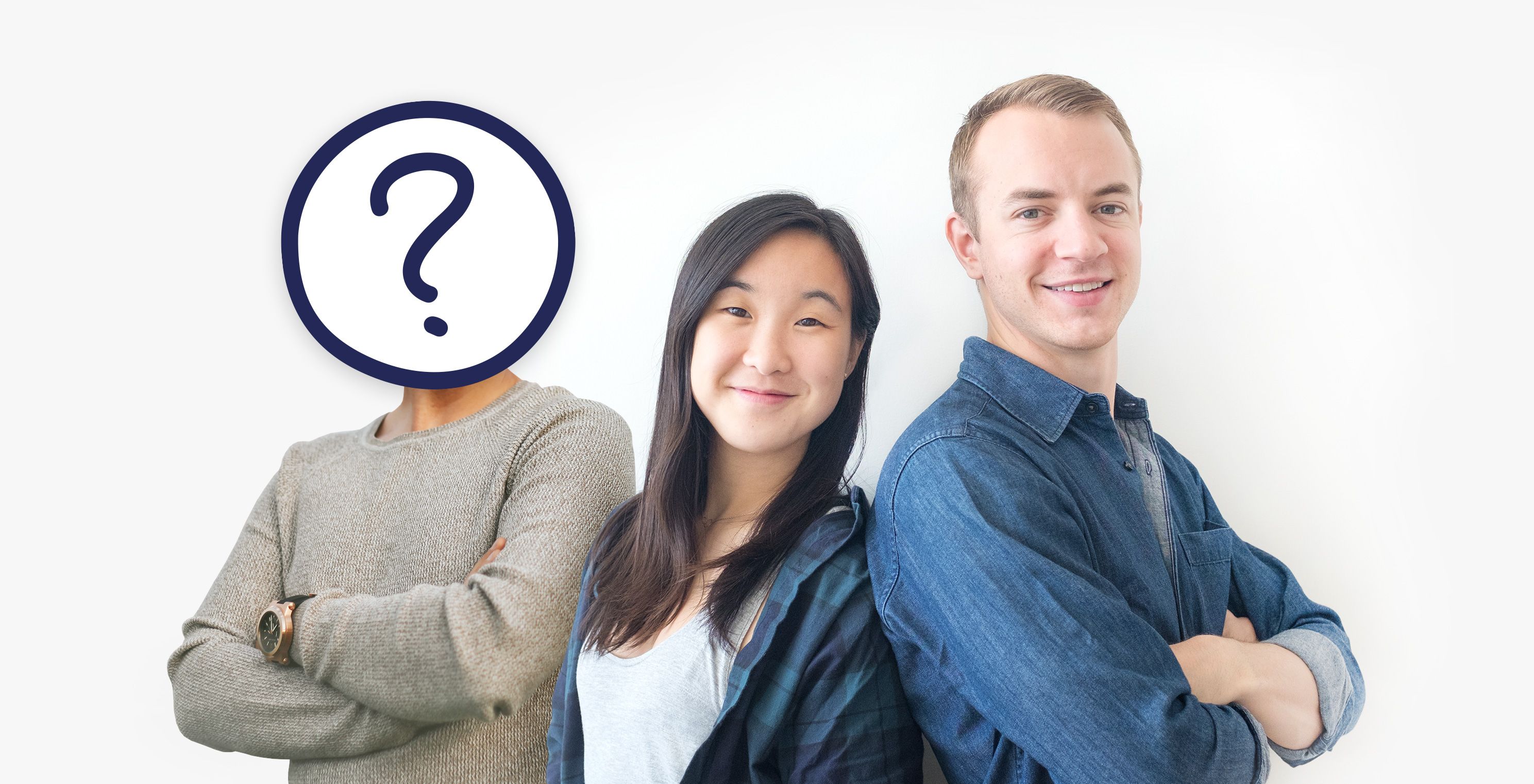 We were starting to feel stretched thin. From building product to doing marketing, we split founder time into many areas. Granted, that’s inevitable when you’re starting a company.

But since we were profitable, we started to ask ourselves:
How can we best spend our money to grow faster?

Reliving this experience by sharing it with you has been tough (so you’re welcome!). We’re glad to have come out the other side with so much knowledge.

What follows is our whirlwind journey, from first hire to first fire.

Our first instinct was to hire for outbound sales. Sales = revenue, right? Outbound sales seemed like a straightforward way to get more customers. It would be great to have someone working on acquisition while we continued to focus on product.

The important thing to note here is that, up until then, we had never done outbound sales.

Thankfully, we reached out to other, more seasoned, founders. We described our situation and they all asked us the same question: which acquisition channels were working for us today?

Their advice was that we should double down on the channels that were already working for us. Makes sense. Step on the gas instead of switch to a new car that may not even work.

The channel that stood out for us was content marketing. We’d written a few articles that people enjoyed. They always brought new eyeballs to our website. The thought of bringing in an expert to do more of it was very appealing.

So, we threw together a job listing for a content marketer.

Andrew and I being nomads, the job was going to be 100% remote. This helped tremendously with attracting applicants. Our listing went live on several job boards. Notably, Hacker News: Who is hiring? and RemoteOK forums.

Within the first week, we had over 100 applicants for our content manager position. We easily passed on 90% of applications that: 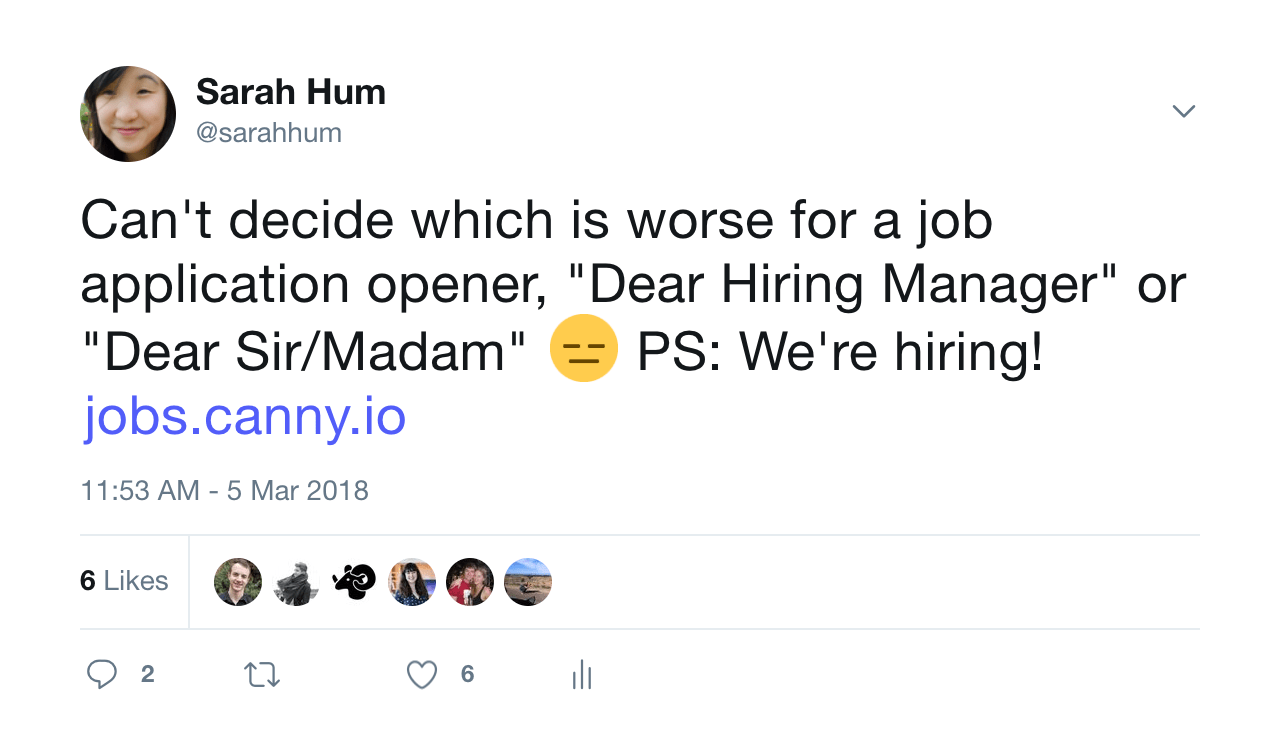 We followed up with the promising candidates to schedule interviews.

Our general approach to interviews is pretty simple:

We narrowed down our pool to two, fairly different people: 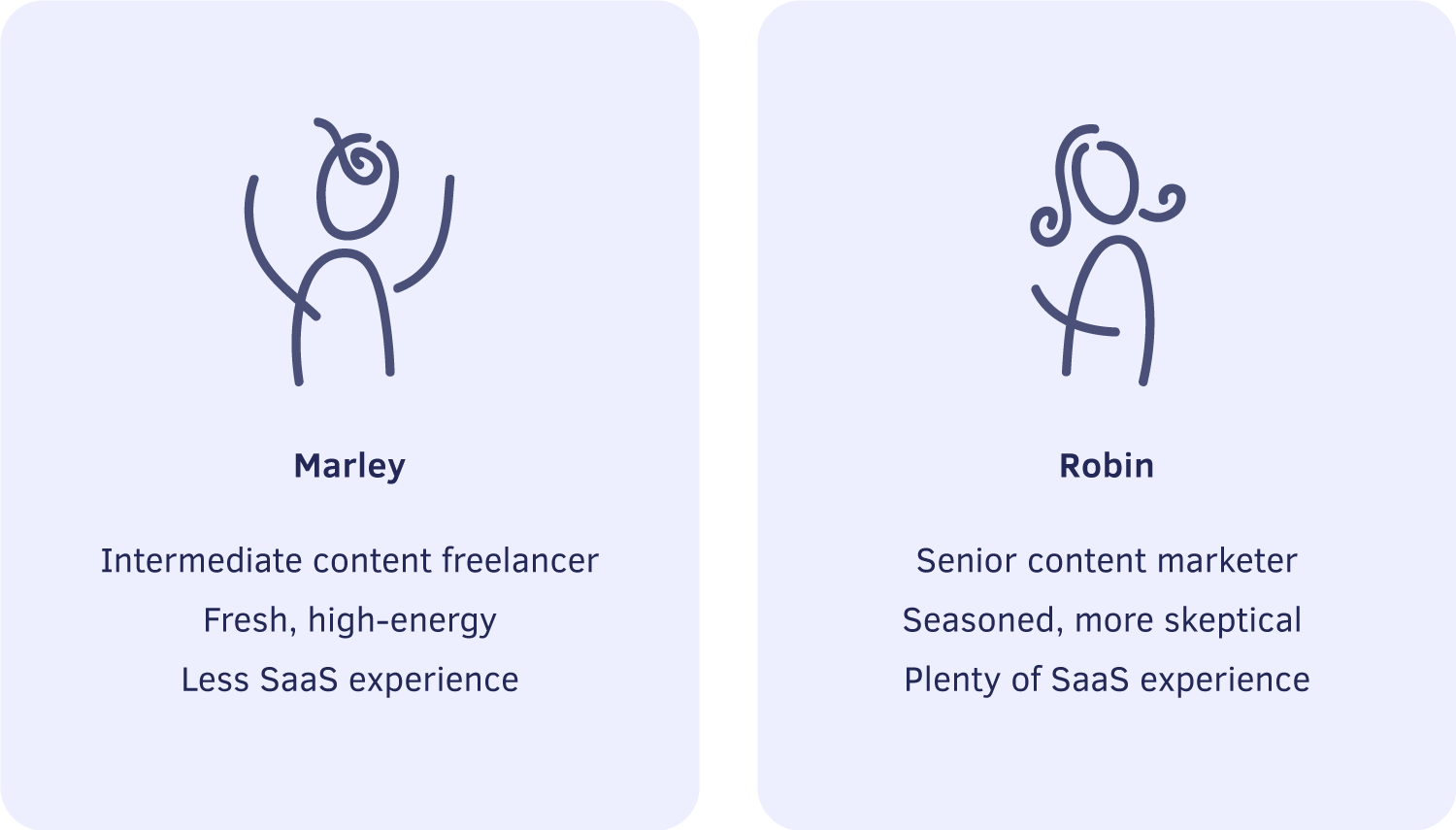 We ended up going with Marley. We really wanted someone who would live and breathe Canny. We also thought Robin might be too senior for our stage. Marley would bring a fresh perspective to our marketing and push us to try new things.

A month after listing the job, we extended an offer. Just in time to go to the Philippines and hang out with some sharks:

Given this was our first hire, our first week went pretty smoothly! We had set up some basic docs to help with onboarding. Stuff like a day one checklist, how we work, tools we use.

In our first meetings, we put plans in place for our marketing strategy. We started to get a feeling of how we could effectively work together.

Especially if you’re starting a remote team, get a bunch of face time in with a new teammate. You learn so much about a person when you can actually see them. Marley and I scheduled weekly 1:1s and we did team syncs every Friday. In between, we stayed connected via Twist.

We didn’t hold back on giving feedback either. Both Marley and I were very honest about things that weren’t going well. We discussed how we could improve and made plans to do so.

It was open communication that helped us see when things took a turn for the worse.

Weeks 2-4 brought up some major issues:

Stress. Doubts. Defeat. It’s crazy how quickly we got here.

Did we start with the wrong projects?
Was it an onboarding problem?
Maybe we haven’t given it enough time yet.

These thoughts ran through my head for weeks. They also came up in my 1:1s with Andrew.

We tried switching projects. We tried adjusting the way we worked together. We continued to give feedback.

We had to be honest with ourselves. This wasn’t working.

On week five, we called it quits.

We weren’t happy with the content work we did. Other areas of work were being neglected. We realized that things weren’t going to get better if feedback was not acted upon.

We also concluded that we hired for this role too early. While we had some early success in content marketing, we had no semblance of a real strategy. We expected someone to come in, take over, and save the day. Not realistic.

In my last 1:1 with Marley, I told him that we would be ending his time with us. It was a very difficult conversation to have. What made it easier for both of us was the fact that he saw it coming.

Be super transparent throughout the hiring process.

We talked about logistics, he gave us some advice, and we went our separate ways.

Breathing a sigh of relief

We’re not experts now; hiring will continue to be a big challenge moving forward. But now we know better.

In fact, we have since brought on a fantastic engineer, a role that we have expertise in. He has enabled Andrew to ramp down on engineering and up on other things. Being product people, we have a clear idea for how this role can be successful and impactful. We didn’t have the same clear idea for our content role.

Could we have avoided this whole thing? It’s hard to say. But this is what we’d consider for next time:

I think this is a good time to mention we’re hiring more great people!

Overall, we have no regrets. Making the wrong hire is stressful and slows down the team, but it’s these experiences where you learn the most. I hope our story helps you navigate the hiring process. Or at least helps set your expectations. Good luck!

Names were changed for the privacy of individuals involved.

Thanks for sharing Sarah. It must have been a tough post to write, but as a reader, I appreciate the honesty.

Only one blog post in the first month? Sounds like Marley was coasting right off the bat 🤷‍♂️. Hopefully you guys get the next hire right!

As an employee, I’m a fan of paid trial projects. It shows that the company values the potential hire’s time, and is also more in line with the employee’s day to day work.

Thanks for reading Chris! We’re bringing on another hire in a couple weeks over here. Fingers crossed 🤞
Paid trials seem pretty good. Not ideal for some candidates who are looking to find their next thing before jumping ship. But definitely interesting if it works for both parties.
More learning to come!