How to get customer feedback for your SaaS product 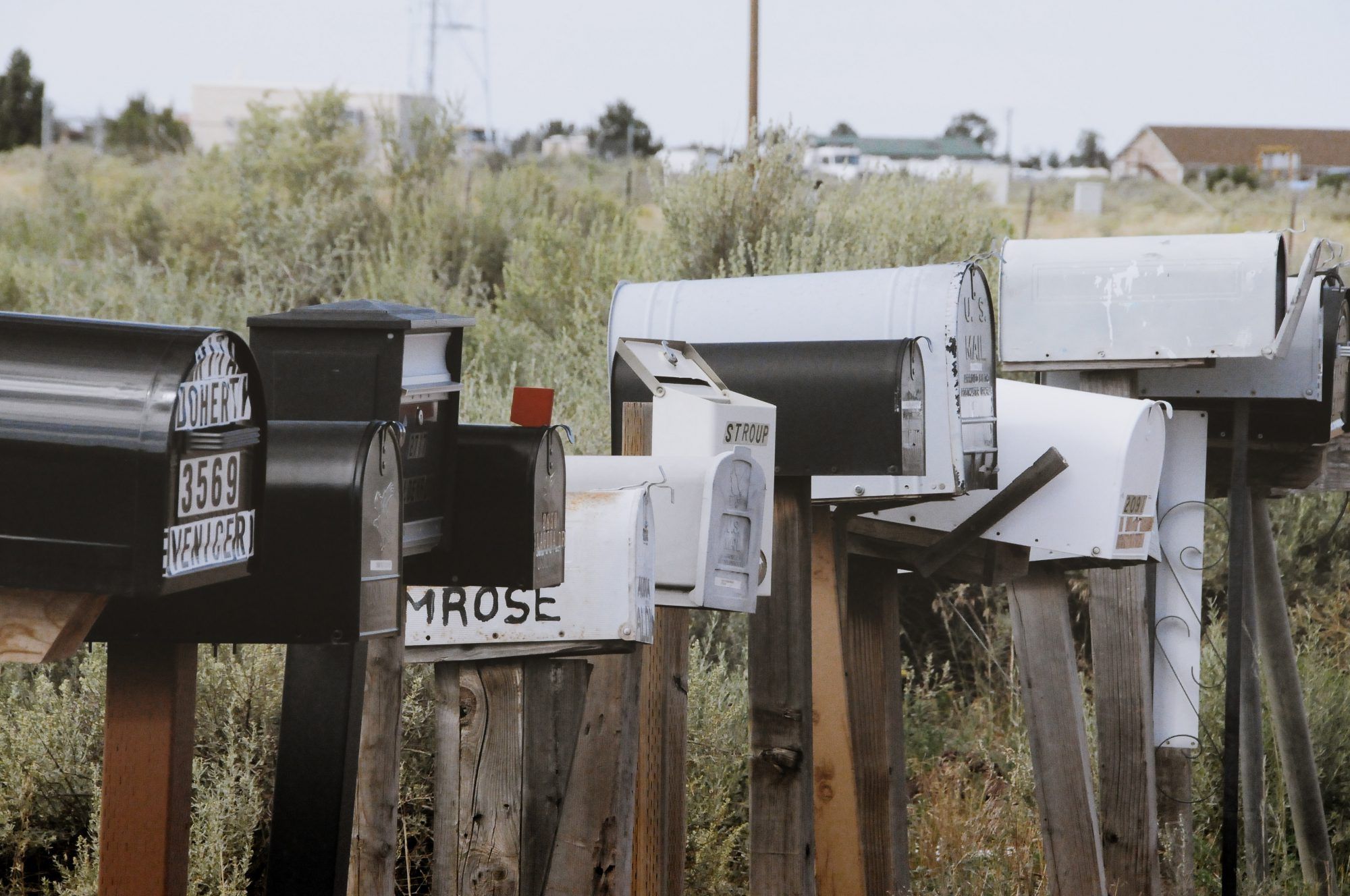 Customer feedback is a goldmine.

It can help you make informed and useful business decisions on your SaaS product.

But, getting feedback can be hard, especially if:

…and then there are people out there who just don’t like giving feedback.

Luckily, there’s a few things to do to nudge your users to give a little more feedback. And, they’ll feel good about giving it.

How to get customer feedback: Start by getting organized

Before you start, make sure you have a central feedback system to gather everything into.

There’s no point in making an effort to get more feedback if it’s going to slip between the cracks or get lost.

A feedback tool like Canny will help you stay organized. It’s an easy way to see all the feedback you’re getting in one place.

You can create a public Canny board where users can submit feedback and vote on features. Or you can keep your board private and track feedback on behalf of your users.

If you’re not yet ready to try Canny, we’d recommend a well-organized spreadsheet at the very least.

From there, it’s time to gently nudge your user base to come in and have their say.

Ask for feedback after every live chat session

…regardless of what the chat is actually about.

It doesn’t matter whether someone reaches out with a bug report, a general inquiry, or something else.

Asking for any other requests, ideas, or concerns after every chat session is a great way to get feedback.

You can use this for both people who are already users of your product and ones that are not.

Why? Because potential customers often have useful feedback to share, too, whether it’s:

Asking existing customers for feedback after every live communication:

To make this easier, use a feedback tool that integrates with your existing chat system.

For example, Canny integrates with Intercom. You can easily pull in whatever feedback you get from live chat. 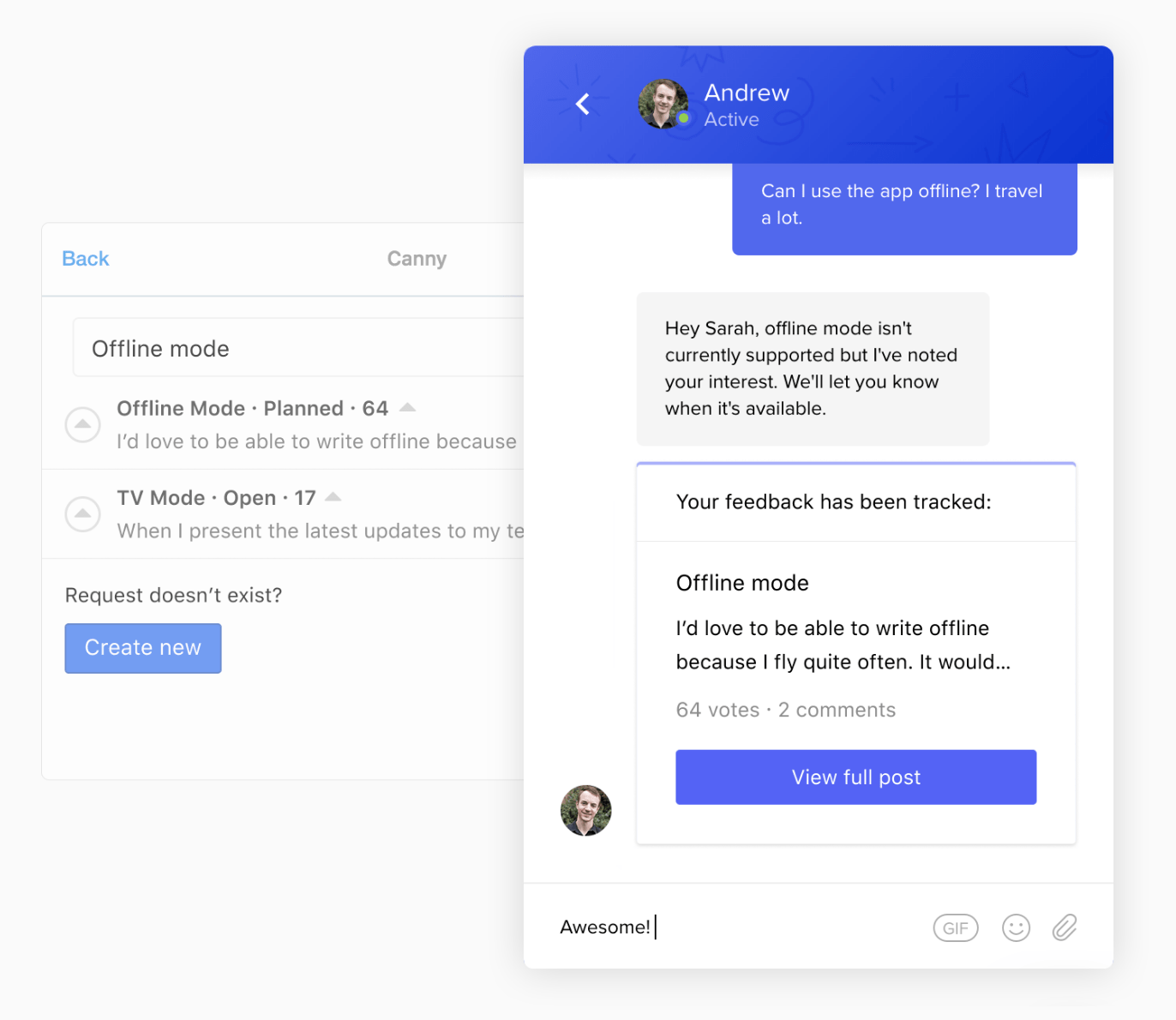 This way, you don’t have to go manually log everything after each chat.

And hey—don’t forget to ask for feedback after someone cancels, too.

It might seem useless to ask for feedback if someone isn’t even a user anymore. But, it’s not. They left for a reason, and you should be aware of the reason.

Once you know why a customer left, you can use that information to prevent others from churning. That’s valuable.

If you’re using a feedback tool, tell your customers about it

A lot of companies make giving feedback a huge effort for customers.

Sometimes people don’t even bother giving feedback because they think it’s annoying or hard to get to.

Live chat is a start, but even that is a lot for some people. We expect long wait times, cold responses, or no responses at all. This holds a lot of people back.

Using a specialized feedback tool shows customers that you care. It shows that you’re invested in collecting regular, quality feedback.

Feedback tools are generally built for ease of use and low effort.

For example, with Canny, users can either:

It’s easy to access, and pretty much zero effort for those who don’t want to do very much.

If you have a feedback tool, make sure you tell your customers about it. Highlight why it makes giving feedback easier for them. 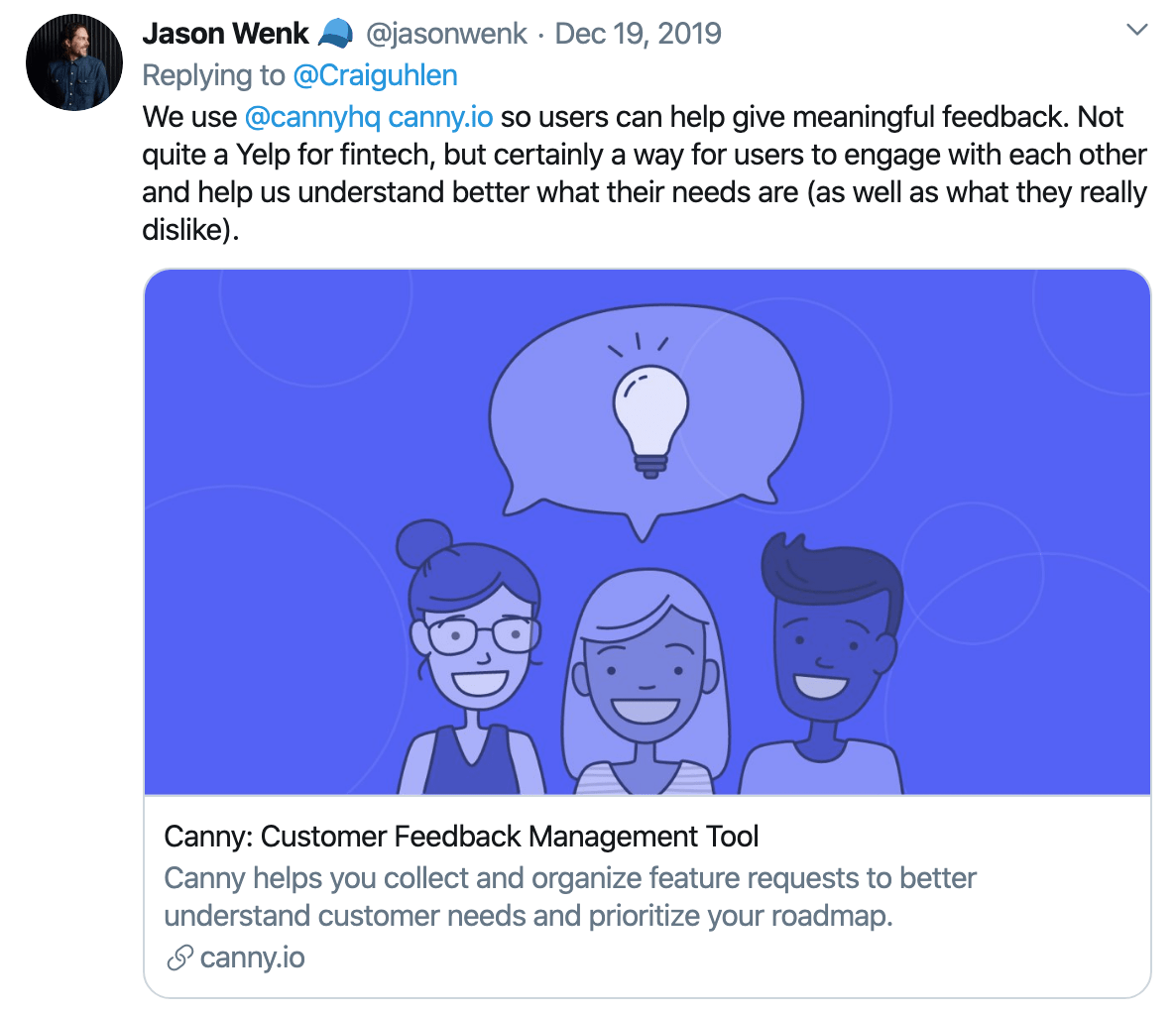 That said, for this to be a selling point for people giving more feedback, your tool or environment needs to be:

Reaching out and asking for feedback directly is great. But, there’s a right and a wrong way to do it.

Nobody likes getting cold emails. The usual “rate our product and explain why” messages are the worst. They’re boring, impersonal, and don’t give anything back to the customer.

Instead, choose the customers whose feedback you would find especially valuable.

Identify which groups you consider “most valuable” for whatever reason. Then, reach out directly. Explain why their feedback matters to you. And, tell them how it will help you make the product better for them.

Personalize these messages based on everything you can, for example:

Heavily targeting and personalizing asks for feedback makes customers feel special. It lets them know that their opinion matters in particular. It also lets them know how their feedback will make their experience better.

This gives you the most actionable, useful, and valuable feedback. Why? Because it’s coming from the groups that matter to you most.

We all like feeling appreciated for the things that we do. This is extra true when we do something we didn’t have to do.

Telling your customers that you appreciate them giving feedback makes them feel good. This will encourage them to keep reaching out when they have something to share.

First of all, make sure you’re genuinely thankful for the feedback you get. This means bad feedback as well as good feedback.

Say thanks (obviously—but a lot of companies don’t do this), and explain why the feedback is valuable:

Second, consider highlighting customers who are providing valuable feedback. Or, displaying the feedback you get somewhere that others can see.

Being grateful and appreciative is a small thing to do on your end, but means a lot to your users.

Getting more feedback isn’t about being pushy

A lot of companies think that getting more feedback is all about sending out more requests for it.

As a result, so many companies send out generic, annoying, cold feedback requests. These are irritating to customers and don’t do much.

Quantity over quality is not the mindset to approach feedback with.

The real goal is to do two things:

Do this, and you’ll make giving feedback enjoyable—rather than a chore.