How to know if you need a customer feedback tool 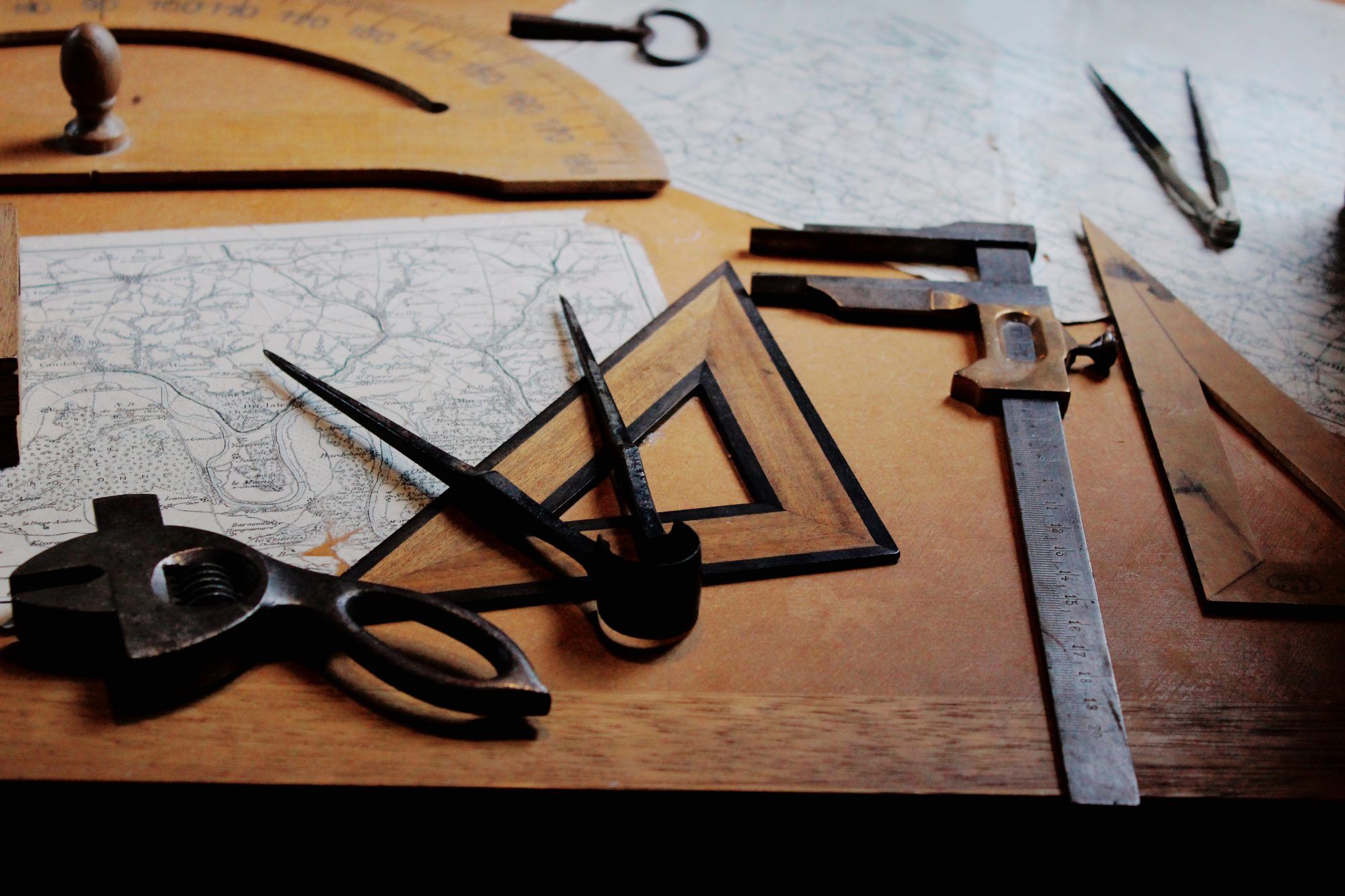 At the very start, you’re probably not getting much feedback to begin with. You’re likely not using a lot of different channels for feedback, either. So, not having a tool isn’t an issue.

We’ve all tracked product feedback in a spreadsheet or a Trello board at some point. However, there comes a time where a simple “solution” like this doesn’t cut it anymore.

Many people assume that the need for a feedback tool comes from growing your business. You either:

These are both valid reasons for thinking about switching to a feedback tool. They’re also the most common ones. However, there’s more to it than that.

There are several other situations that can indicate it might be time to start using a specialized tool. Today, we’re going to go over them.

Feedback is getting lost

Users’ feedback slipping between the cracks is one of the most severe indicators of needing a feedback tool.

This issue can have several reasons:

…and, it can also be a combination of the above.

It happens so the best of us—sometimes. However, if it’s a recurring event, feedback getting lost is a major problem.

If it’s urgent issues that are getting lost, users won’t get solutions for their problems. They can’t use your product.

If ideas, feature requests, or other feedback is getting lost, users will feel like they’re not being listened to. It’ll make them thing you don’t care about your customers.

Either way, your business, your reputation, and your product are going to suffer.

The unfortunate thing is that a lot of users won’t tell you their messages are getting lost. They’ll just leave, and you’ll never know what was wrong. Losing customers is bad enough, but it also means you can’t improve.

Fortunately, there are still some who do speak up, and these people are usually very upset.

User feedback tools are built for making sure nothing gets lost:

Remember—for every one person who actually complains, there are probably tons who don’t. If you feel like you’re already getting put down for losing feedback, it might be time to start using a feedback tool.

Your support teams have too much on their plate

Customer-facing employees have a lot of responsibilities regardless of how small or big the company is.

Customer-facing teams aren’t just there to answer emails. They have a considerable role to play in keeping your business growing.

Sometimes, we find ourselves in a position where our support people are overwhelmed and burned out. Hiring new ones isn’t always an option because of financial issues.

It might also be too soon to hire a whole other person to help, if the overload isn’t massive.

In the case of the workload being too much, but not enough to hire more help, a specialized feedback tool can help with clearing some of the stuff on the plate.

Keeping track of feedback in a tool also means more general peace of mind. Instead of trying to remember who asked for what, when, and why, and stressing about it, everything is in the tool whenever you need it.

We’ve talked about the communication problems between these teams before.

With more feedback coming in, there’s also more need for context for better prioritization. Discussion and digging into issues is an integral part of an effective feedback cycle. 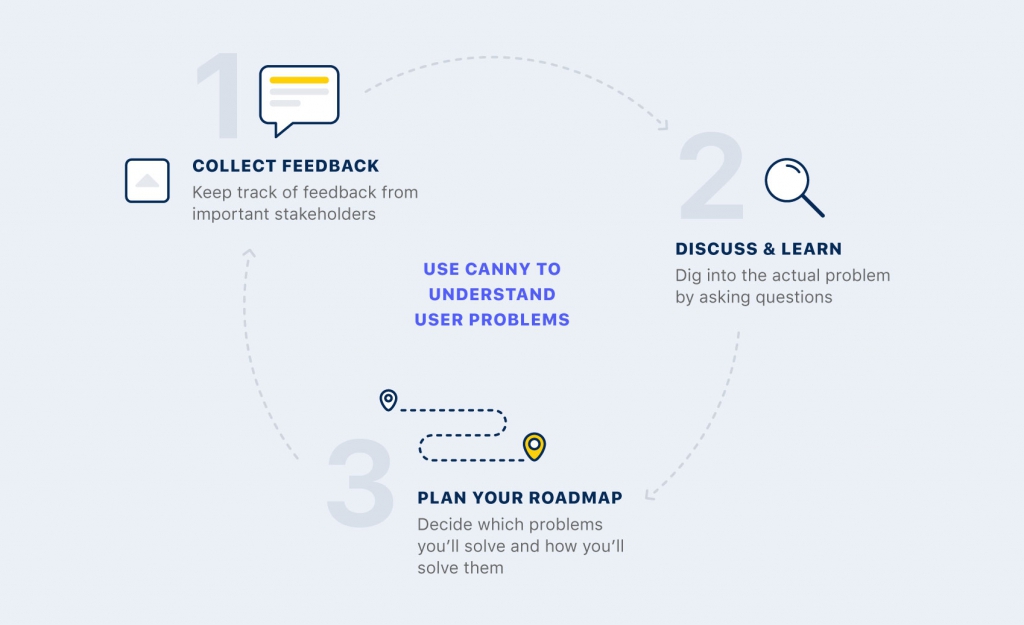 Very basic systems are often not enough for effective communication between the teams. There’s no place for additional discussion, comments, questions, or context.

If product needs more information, support needs to go back to their own source, have a conversation with the user, and then go back to product.

It’s endless back-and-forth, that can easily be eliminated or reduced by a feedback tool.

Product feedback tools put all the user feedback in one place, and also allow several people from a company to collaborate on it.

Software like Canny acts as the glue between product and support, allowing them to work on problem-solving and context together.

Product teams can go in and see the feedback for themselves, and engage in discussions with the users to create context for their work.

You want to be more transparent externally

You don’t have to open up your feedback tool for everyone to see. It’s okay to use it privately.

Dealing with feedback only internally is the safe and comfortable thing to do. However, there are some benefits to making it public.

We all assume that companies are working on making their product better all the time.

However, seeing that a business is trying to constantly improve creates much more trust for potential customers. Many feedback tools have a way of showing your roadmap as well as finished features. 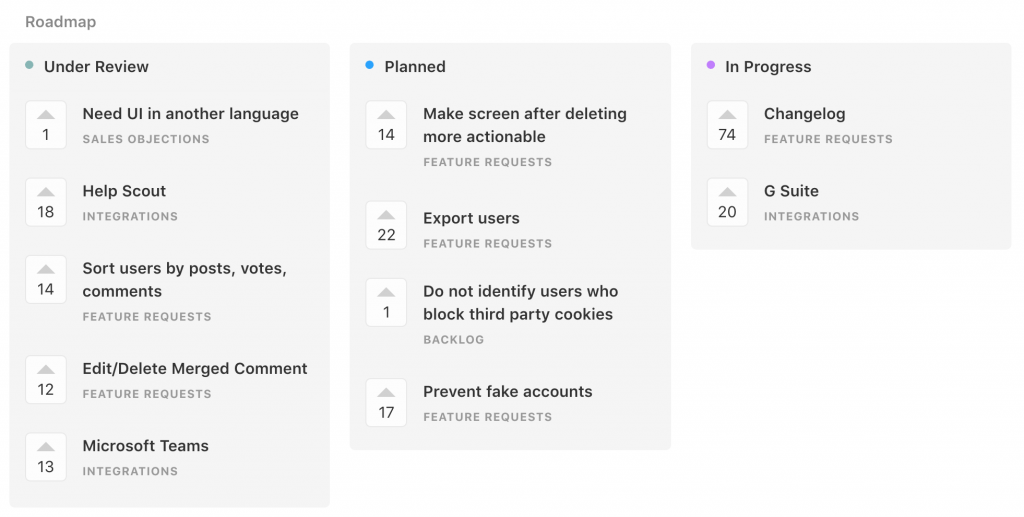 This could be the differentiator between you and a competitor.

We usually only see how a company reacts to our feedback. However, if we haven’t given feedback yet, we have basically no way of knowing how a company deals with it.

With a public board, we can take a peek into any company’s feedback, and see what they’re doing with it.

Additionally, we’ve all sent feedback and seen it disappear into the oblivion, followed by something like this: 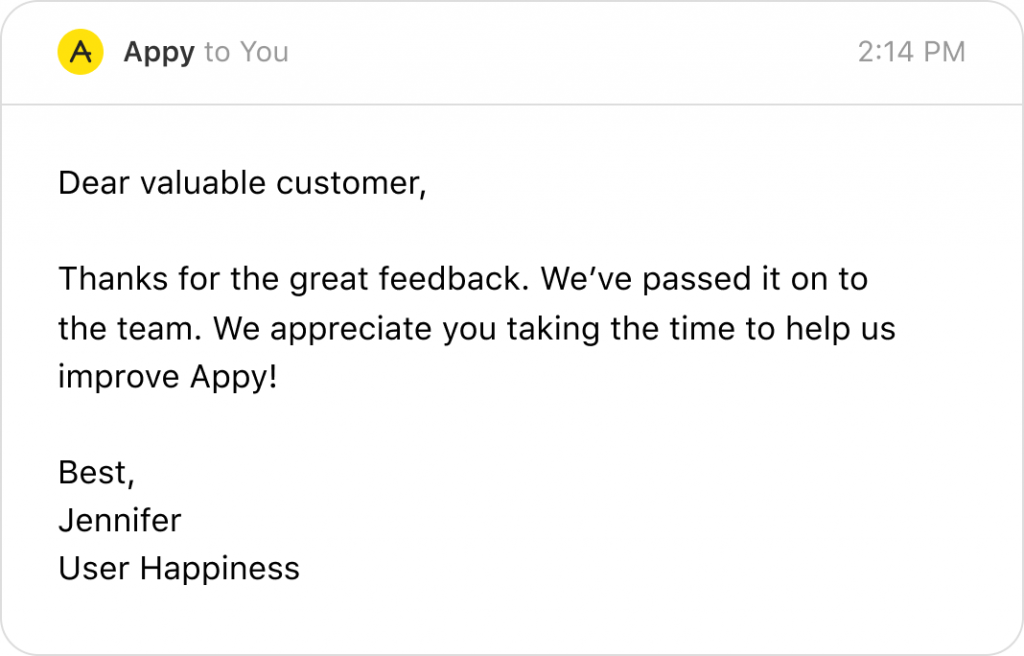 Clearly automated messages don’t feel very personal or reassuring. Did anyone get it? When will a real person see it? When will I receive a reply? Will I even get a real response at all?

With a feedback tool, we can constantly keep an eye on new feedback coming in. We can actively engage in a discussion with our users.

They can see that their feedback is still there, and not laying at the bottom of someone’s inbox somewhere.

If you actively engage with your users in your feedback tool, have discussions, and offer solutions, it’ll impress people who aren’t even your customers yet.

You want to communicate to your users more

This interaction also usually happens between the user and just one of the team members, usually a support agent.

It also encourages users who usually don’t give feedback to do so. If they see others doing it, and the company actively engaging with them and trying to solve their issues, they’ll want to get in on the action. 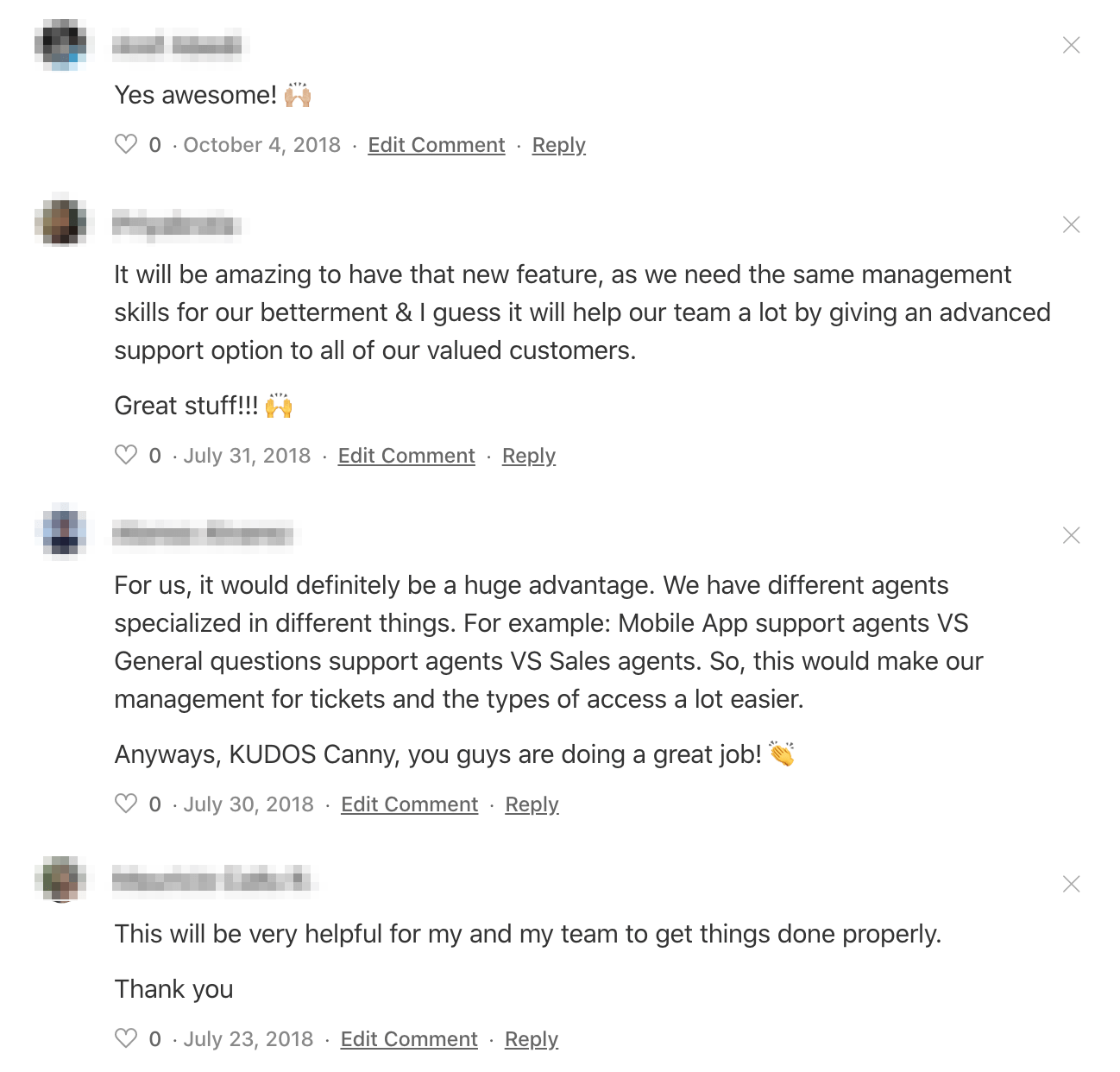 This means you’ll be receiving more feedback than you would if you only interacted with each user privately.

It’s also a great way for people who don’t have the time or energy to submit their own separate feedback.

They can just go and chime in quickly with someone else who has already described a problem, idea, or anything else they’ve had. 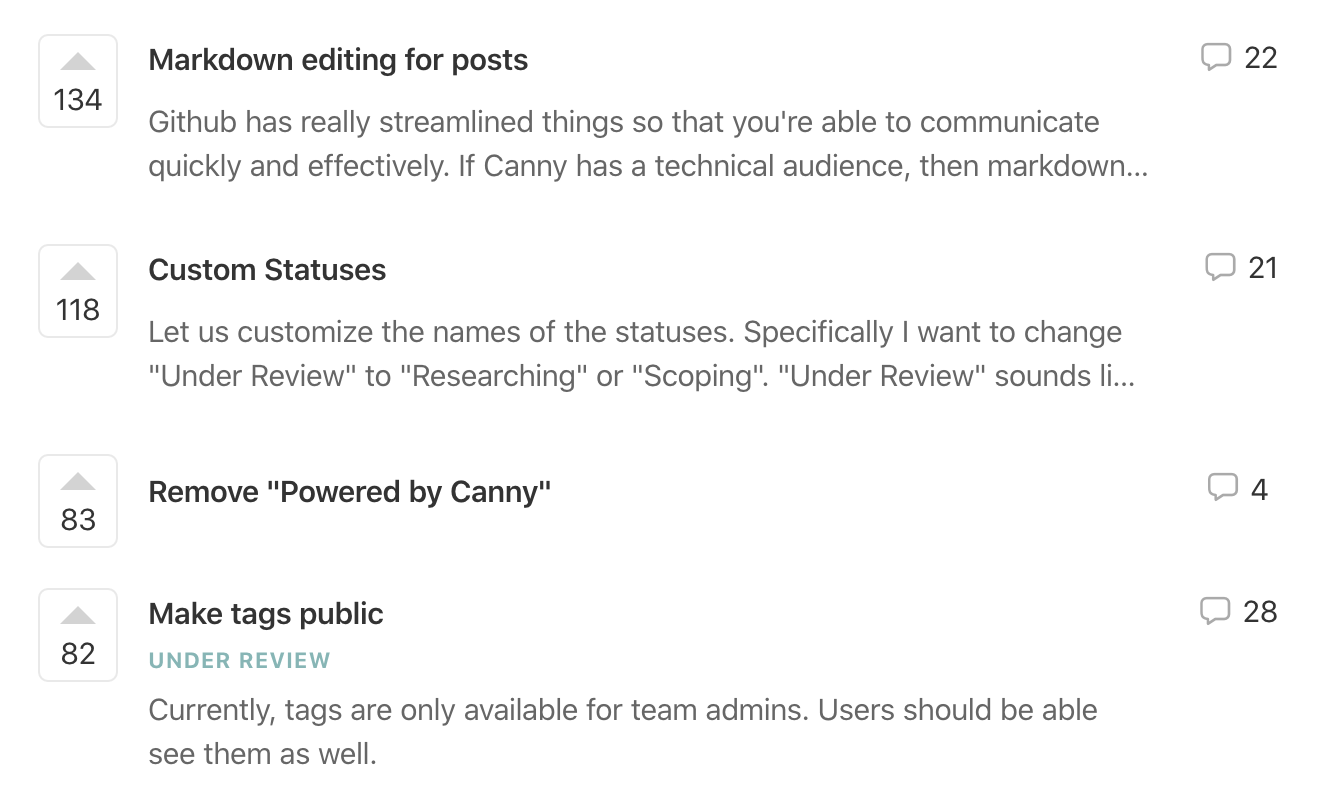 With that process simplified, you’ll get much more insight into what more of your users need.

Streamline your process with a feedback tool

Feedback tools are meant to benefit both you and your user.

For you, they help reduce the amount of feedback lost and encourage communication between team members. They make prioritization easier, and organize feedback in an effective way.

For your users, it reduces the effort they have to make to give feedback or chime in.

You might be in a phase of your business where you don’t need a feedback tool yet. However, getting your feedback cycle in order is a good thing to do sooner rather than later.

Thanks for the heads up. I’ll keep an eye out for when I’d start needing a feedback tool. At the time, I can manually work around user feedback without the fear of loss.

Really nice piece, well done. I´m in the public sector and will probably have to develop a tool for getting feedback. Was tired but couldn’t get to sleep, so interesting! Thanks, keep it up.