Should you have a public roadmap? 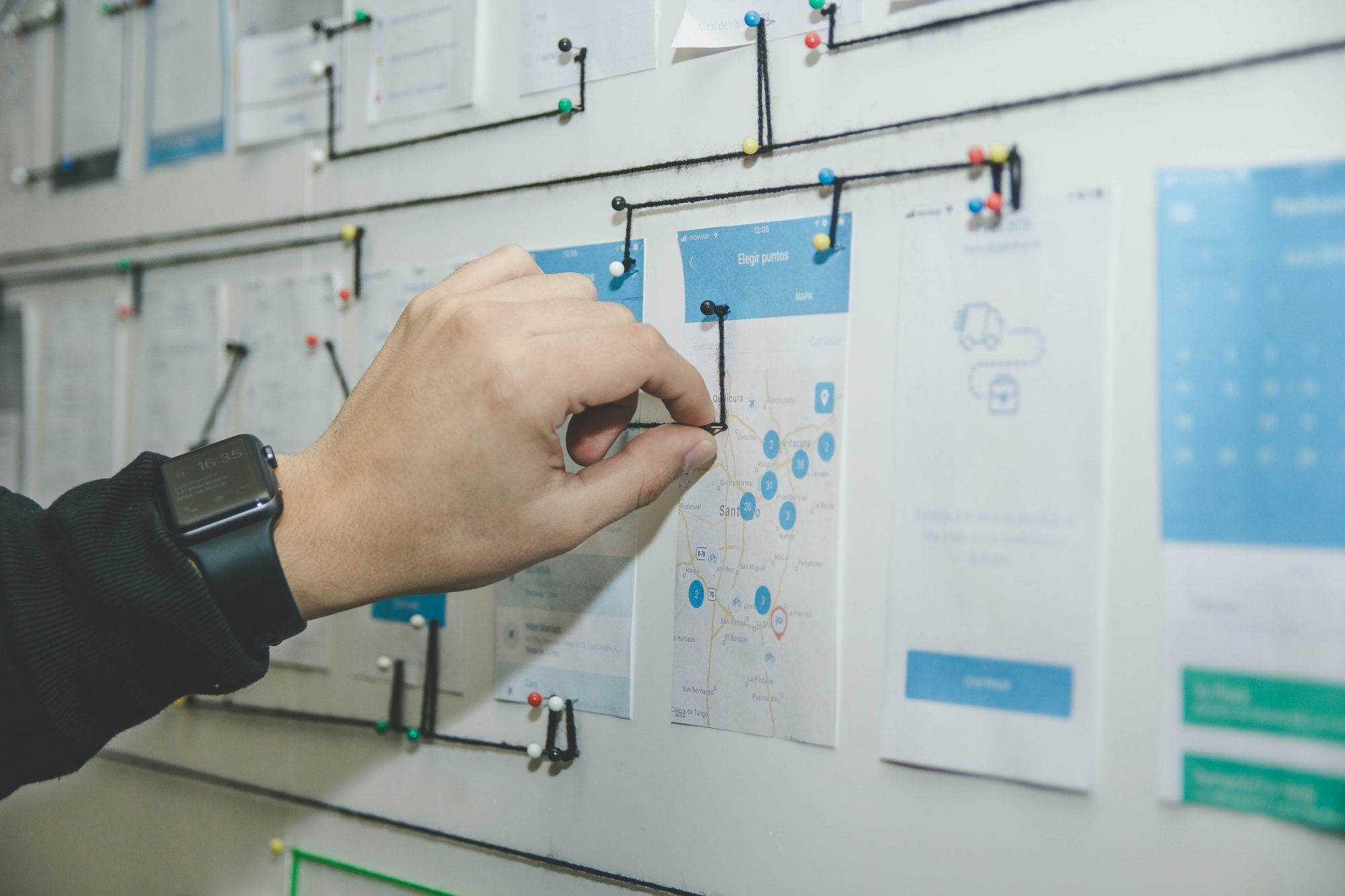 With a public product roadmap, anyone can see what you’ve been working on.

Understandably, this can be a little nerve-wracking. You’re pulling the curtain back in a big way. Outsiders will now be able to see details of what your company is working on.

There are huge benefits to a public product roadmap—even if it feels a little intimidating.

If I have a public product roadmap, will competitors steal my ideas?

It’s hard to get over the fear that a competitor might look at your public roadmap. And, they might build features exactly like the ones you’re currently working on.

Is it a possibility? Realistically, yes. If you share details of your process, it’s possible that people will try to duplicate what you’re doing well.

But, the benefits of having a public roadmap outweigh this potential con. We’ll get to those benefits shortly.

Ultimately, the issue of idea theft comes down to this:

If competitors are looking to your roadmap for inspiration, that means they’re leaning on your customer base to tell them what to build—not their own. At the end of the day, this will hurt them, not you.

I reached out to Tim Soulo of Ahrefs (and Canny customer) to get his input. He believes there aren’t any critical downsides to a public-facing roadmap:

With that said, here are 6 reasons why having a public roadmap will benefit you, and help you build a better product.

6 reasons why you should have a public product roadmap

When you have a public roadmap, you’re able to show your customer base exactly what you’re in the process of building.

There’s hardly a better way to be transparent than by showing the world what you’re working on.

Transparency is huge when it comes to driving loyalty. In one survey on the ROI of transparency, 94% of consumers said they are likely to be loyal to a brand that is transparent. And, 73% said they’d be willing to pay more to do business with a more transparent company.

I reached out to Tom Redman, head of product at Buffer. Anyone can access the Buffer roadmap; For Tom, having a public roadmap aligns with Buffer’s overall culture.

“At Buffer, we’re ‘transparent by default.’ That is, if we don’t have a compelling reason for something to be private, it’ll be shared transparently.”

Being upfront and honest with your customers is hugely valuable. Using a roadmap to show how your company actually takes on work is a big deal. You’re giving your customers a look behind the curtain. They’ll value that level of trust and commitment to transparency.

2. It manages expectations for what you’re building (and not building)

When users can see your roadmap, they can see what your current priorities are. They’ll be able to see product direction and get a sense of your goals.

And, if you’re not building something, they’ll see that too.

If you have key features in the pipeline, a public roadmap gives potential users a look at what you’re building. It’s added value that your product might not have currently, but will soon.

If a current customer sees active work on a feature they really want, it can prevent churn. Similarly, a public-facing roadmap can serve as a sales tool for prospective customers. You’ll be able to show that you’re actively working on certain features that they need.

“It’s a good way for our customers to see that their feature request is not as popular as they were hoping it would be.”

Public roadmaps put things into perspective. You’ll be able to set expectations for what isn’t going to happen as much as what is. This helps keep your users from being disappointed or feeling left in the dark.

This is especially impactful if you’re using a tool like Canny that allows for feature voting. If a suggestion has a very limited number of votes, users can better understand why you’ve decided not to add a feature to your roadmap.

3. It cuts down on questions

When your users can see what you’re working on, there’s less of a need to reach out with questions.

If you update your roadmap regularly, customers can easily see where you are on a certain feature. They’ll have less need to reach out and ask about progress.

You’ll lessen the load on your Customer Success or Customer Experience team, to start. The less customers have to ask about the status of a feature they need, the less time you need to spend updating them.

And, on the flip side, your users won’t have to spend valuable time reaching out to ask questions. Instead, they can just check out your roadmap. (Or, you can update them automatically—see #5). Eliminating unnecessary hoops to jump through makes for a better customer experience.

“[Transparency] was the primary driver for us to have a public roadmap, but the practical benefit is that we can send customers or others with inquiries there to see what we’re working on, vote for, or even comment on upcoming items on the roadmap.

That’s been very helpful in sharing what our priorities are.”

You might have a very understanding customer base. They might totally get that it takes some time to build, test, and ship updates.

But, you might occasionally have to deal with frustration, too. When we want things, we often want them immediately.

When you have a public roadmap, you can lay out the steps your team takes to get from A to Z.

Users can follow along and see what’s getting done when. And, they will have a better understanding of how long it will take for new updates or features to be introduced.

Showing how long things take offers a sense of perspective. It grounds the process. Rather than rolling out improvements seemingly at random, users can see the steps.

You’ll also be able to better manage timeline expectations. A roadmap shows that things are happening—just not overnight. 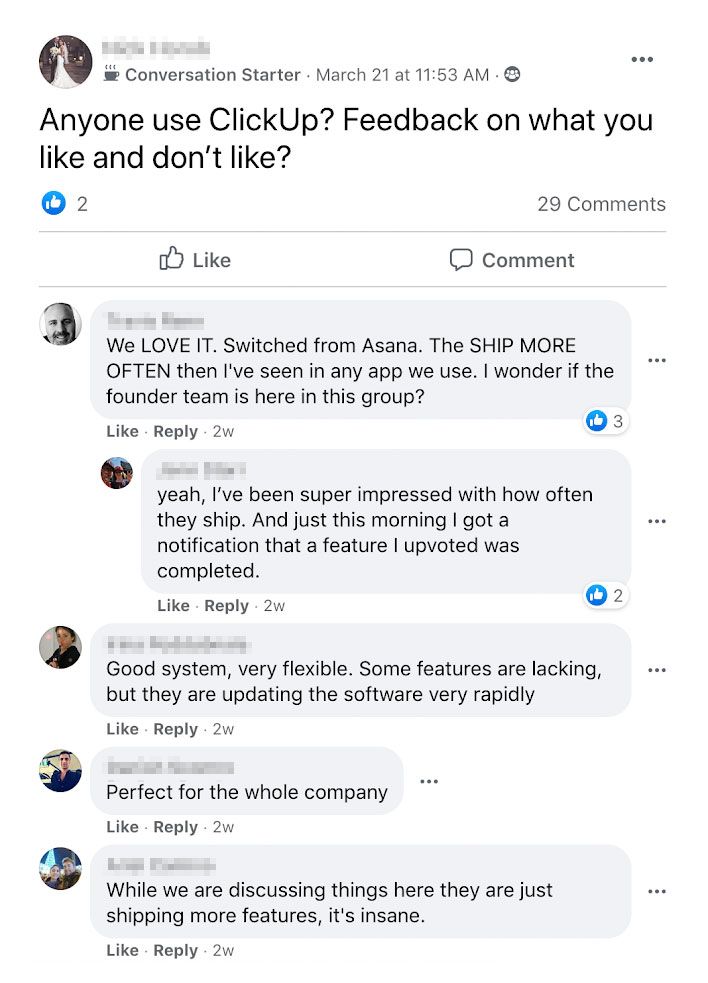 Finally, users (and prospects) will appreciate the fact that you’re continually improving. (See the conversation above, from the SaaS Growth Hacks Facebook group for an example here.) A company that continues to iterate is more appealing than one that built a feature set and called it good.

A roadmap doesn’t just give users insight into how you work (and how long things take). It also shows that you’re continually growing and improving.

The work outlined on your roadmap is probably high-value. It might be a feature that you need to attract a specific type of customer. Or, it’s a fix that will make an existing important user really happy.

Regardless, you’ve likely got lots of different stakeholders that care a lot about what you’re working on.

A public roadmap helps loop everyone in. And, the more you can automate the process, the less time you’ll have to spend doing it manually.

This one’s a bit obvious: It saves you time.

With some roadmaps, users will be automatically updated when a project or task is moved to the next phase, or marked as complete.

If you’re using a tool like Canny to build your roadmap, you can notify key stakeholders without taking extra steps. They’ll get notified immediately with new comments or status changes.

This isn’t just limited to outside stakeholders. Being able to update your internal team is also hugely valuable.

For example, your sales team might be waiting on a key feature that they know potential customers want. If they’re always looped in, they’ll be able to keep prospects updated on your timeline. And, once the feature is live, they’ll know right away—and close more deals as a result.

We’ve written more on the value of internal product roadmaps here, for more detail on the subject, if you want to dive deeper into this use-case.

With Canny, you can also integrate with your existing project management tools. This can be incredibly helpful for looping in different members of your team.

For instance, Canny integrates with Jira. With this integration, members of your team that aren’t working on product can stay updated without having to log into (or even use) Jira. They’ll get the updates they need automatically, from updates to your roadmap.

Of course, what you have available depends on the roadmapping tool you use. Tools like Trello, which aren’t really designed for roadmapping, won’t have these features built in.

6. It defines the process—from feedback to feature

When used in conjunction with a product feedback tool, your roadmap is a clear next step that shows how you plan to act on feedback.

Maybe you’re using a tool like Canny to collect feedback (and of course, we recommend you do). Maybe you’re just manually keeping track of the feedback you get and your most-requested features. (We’ve also covered how to determine if you need a feedback tool.)

Whatever the case, your users will want to know what you’re doing with their input. Are you actually implementing any of their requests?

Showing that you are taking feedback seriously, and using it to inform new features or fixes, is huge. It creates a loop. A user suggests a certain feature, and then can watch as your team works on it. This instills confidence—in the feedback request process, and your company itself.

A public product roadmap offers transparency and closes the loop 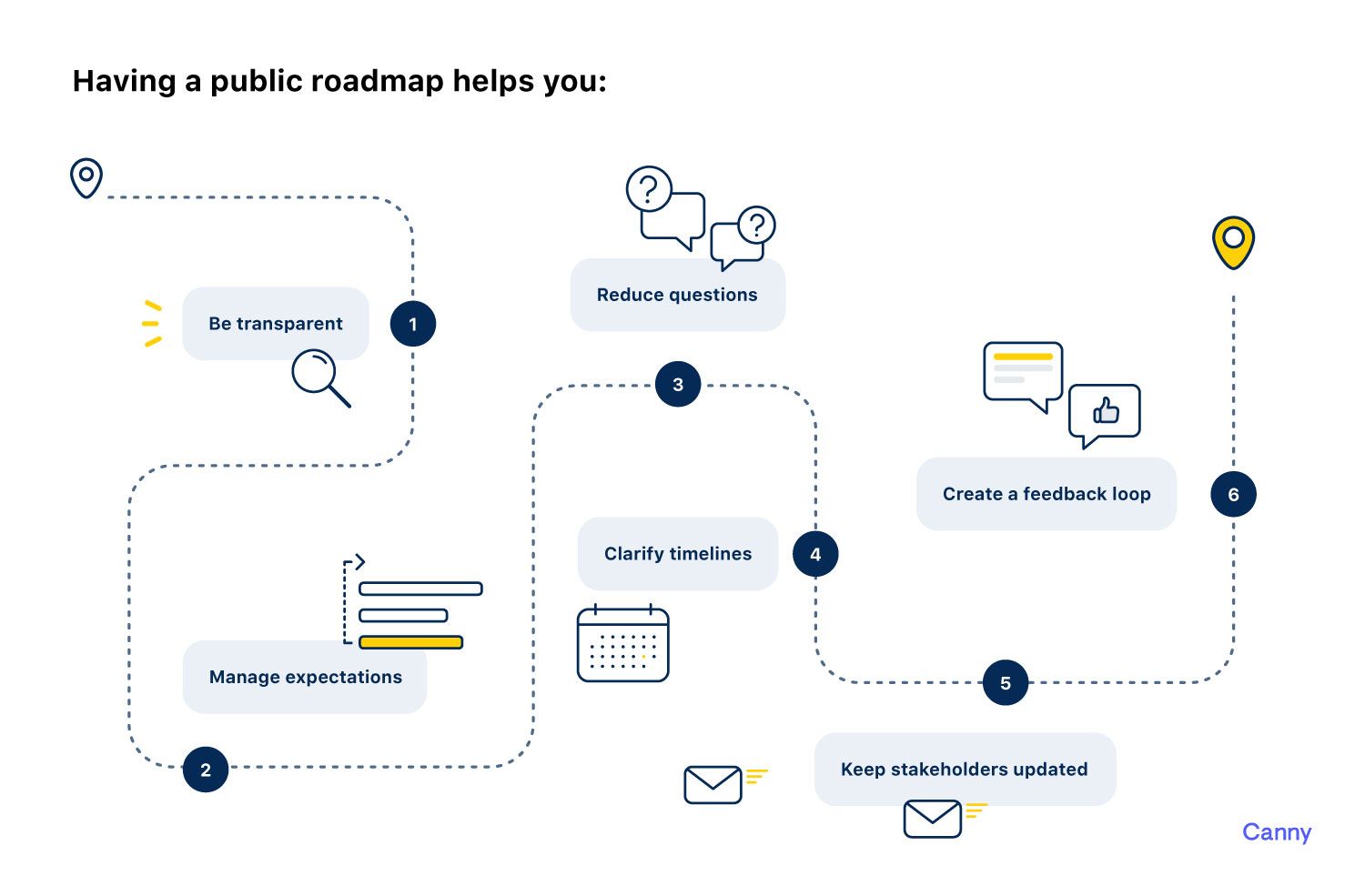 Ideally, your roadmap should be the natural next step that comes after collecting feedback from your customers. It creates a system—user feedback becomes new features and improvements.

By publicly sharing your progress, you’ll instill confidence in your user base. Their feedback isn’t just disappearing into the ether. You’re actually doing something with it.

Does your team have a public roadmap? Why or why not? Let us know in the comments, or tell us on Twitter.

Bri heads up content marketing at Canny. When she's not doing that, she can usually be found baking, playing with her corgi, and trying to optimize her life in whatever ways possible.

How to ask for feedback for your SaaS product (+ infographic)
Product roadmap planning: How to prioritize your roadmap
Login
0 Comments
Inline Feedbacks
View all comments